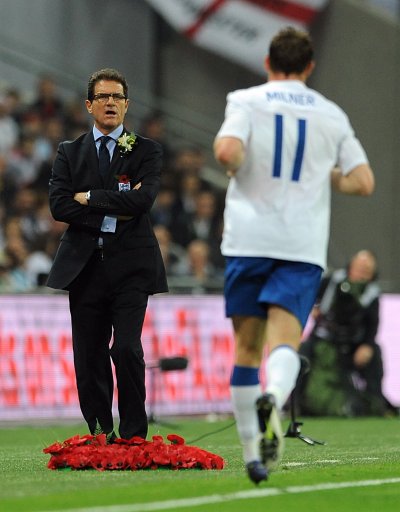 Fabio Capello, with poppies at his feet, is disgusted by James Milner’s poppy-less arms.

Just when we thought we’d heard the last of the bizarre poppy furore (at least until next year), The Sun are kind enough to give us one more poppy-based new story.

While most of us were wondering how the hell England were winning against a superior Spanish side, The Sun’s gifted journos were following the fortunes of those controversial poppy-emblazoned armbands, which sat on the muscular and over-tattooed biceps of the Three Lions heroes.  And guess what they discovered – a number of England players actually lost their armbands during the game, the ungrateful, unpatriotic upstarts. Big Phil Jones was one, while Frankie ‘Lamps’ Lampard also lost his. How anti-British can you get?

The paper also tells us that James Milner and Scott ‘Scotty’ Parker were also without the sacred armbands of remembrance. Have these footballers no respect for the sacrifice our armed forced have made? Or were the armbands simply badly-designed? You decide. If you could be arsed.

And read the moving story here if, again, you could be arsed.