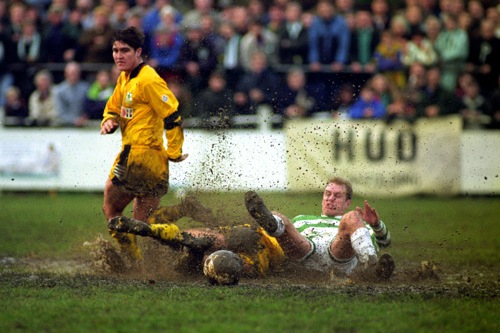 A familiar scene in English football: muddy hoofing is the order of the afternoon

I like watching England fail. It gets me up in the morning. But there’s plenty of guff talked about how to improve the national team. Luckily for everyone else, I’ve cracked it. You’re welcome. The answer is simple: get rid of the teams in the third and fourth division.

France and Spain both have two professional leagues. Germany has three. England has four divisions, contributing 92 teams. Understandably, this is regarded as one of the major achievements of England – we’re committed enough to keep so many clubs going professionally. However, the structure we’ve supported has propagated the muddy hoofing that passes for British football. If the English subscribe to the wish that they want to succeed internationally, then it demands the rationalisation of the system.

The first reason why is, inevitably, money. TV money is scarce already for the Championship teams before some of the revenue finds it way to the even smaller teams. The solidarity payments from the Premier League go the same way. At the moment, owning a Championship team is an excellent way to lose a few million and become hated by your hometown. If this money was given to fewer teams, there wouldn’t be any fewer games on TV, so the channels wouldn’t lose out. But with more cash, the remaining teams would be further removed from the usual financial precariousness.

More importantly for England is that this would be the chance align the styles of play between the Premiership and the Championship. The move from League 2 to League 1, or League 1 to The Championship demands no change in a team’s style. The teams’ limited approach lets people watch long-ball tactics, and there are only rare exceptions. It cannot be right that three quarters of England’s professional leagues educates its trainees to succeed in this manner. No wonder we’re scared of possession, most of our midfielders spend their weekends watching the ball avoid them.

The Premiership is, admittedly, home to Wolves, Blackburn and Stoke, teams that play rampant filth and dole out serious injuries when given the chance. However, there are teams of questionable quality (the standard in the Premiership is the lowest for years) who nonetheless deserve praise for their style, like Wigan, West Brom and Blackpool. Most of these teams play in a more sophisticated style than any England team since 1996. The Big Four don’t have panic attacks after four passes, in clear contrast to the eleven whiteshirt cowards last week and last World Cup. Thankfully there remain talented players for youngsters to study and use as an example to improve. If the English culture changed to focus on possession, there would be a reason to finally ignore the big bastards as the lowest leagues’ most effective players. It would mean that Premier League teams would be more willing to grant loans to the Championship. It beats the current system of employing managers who have played for Alex Ferguson. 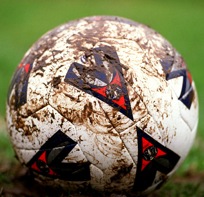 We’re constantly told that there are dire coaching standards, and that funding gives English youngsters just three training cones across the country with which to practise. If we had fewer academies, only the best English coaches would remain and only the best young players would have the chance to become footballers, and better footballers at that. Contrast that with Clairefontaine, a national institution producing the finest players for the benefit of both teams and the nation. Contrast that with Spain, where B teams are exposed to their professional lower division.

There are other benefits. Glenn Hoddle’s last chance saloon Second Chance Academy proves there are too many young players following the dream of being a professional footballer eventually rejected. Nobody is fooled by the claims of rounded education for these teenagers. If we had two professional leagues, the number of rejections would be halved.

If the FA carries out an extensive reform on British football, as it intermittently threatens, it would have to disband half its leagues. The FA Cup would finally be euthanised as there would be even fewer upsets, but at the moment it’s in a coma anyway. Most football clubs would have to consider whether it was worth the effort or financially viable to continue outside the top two leagues. Millions of people would be heartbroken. But it would mean that England would stand half a chance of getting past the quarter-finals for the first time in almost 20 years.