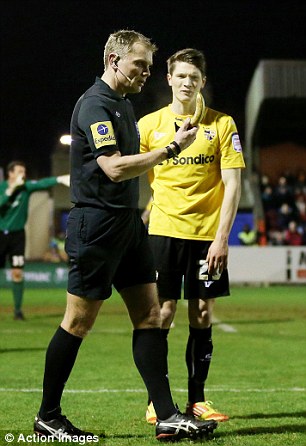 Police have arrested a 74-year-old AFC Wimbledon fan after he was caught on camera throwing a banana at referee Graham Scott during Thursday night’s 2-2 draw with Port Vale.

Though Scott was visibly amused after realising he’d been struck by the airborne banana, the pensioner was corralled before leaving the ground, then later interviewed by the police and released on bail.

Police have also thankfully confirmed that they don’t believe the white-on-white fruit fight was racially motivated.

“We saw the banana thrown on to the pitch and then reviewed television coverage. It appears a supporter was angered by a decision by the referee and aimed a banana at him.

“It was not aimed anywhere near any player.”

So the old boy took umbrage and pelted the referee with whatever he had to hand. Good job he wasn’t halfway through a scalding Bovril.