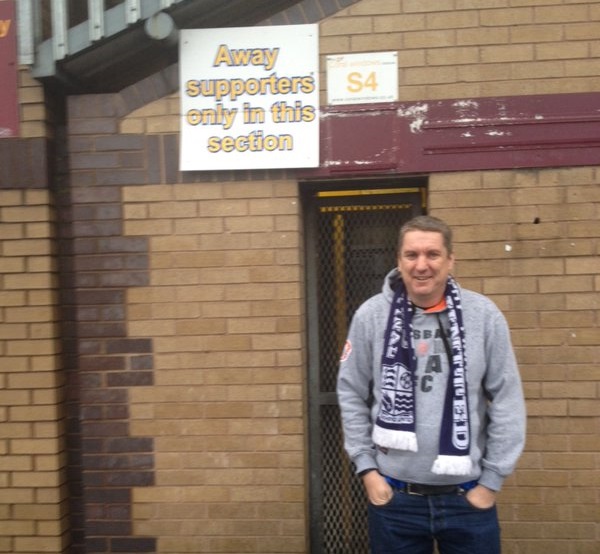 Apologies for being slightly tardy on the uptake here but the man you see before you is Andrew Urry, a Southend United fan currently living in Brisbane, Australia.

Take it from us, he really is deserving of your sympathy.

Poor Andrew made the decision to travel back to England as part of a tour around Europe in order to watch his beloved Shrimpers take on Bradford City in League One on Saturday.

After weeks of planning and preparation, our intrepid hero made the gargantuan 10,200-mile trek from Brisbane to Bradford. Sadly, the Yorkshire climate let him down in spectacular style.

Indeed, he managed to make it all the way to the gates of Valley Parade before hearing that the game had been postponed due to a waterlogged pitch.

“We were told as the coach pulled up outside the stadium,” he told BBC Essex.

“I got off the coach to have a couple of pictures taken outside the away turnstile, and then we were straight back on the road again.”

Bless him, he did his best to smile…

Thankfully all is not lost, as Andrew is hoping to stick around long enough to take in Southend’s next three home matches as well as the local derby against Colchester on Boxing Day.

Southend also did their bit to soften the blow, offering Andrew a signed football on Twitter.

If they could throw in a guarantee of decent-ish weather for the next couple of weeks too, it’s probably be much appreciated.