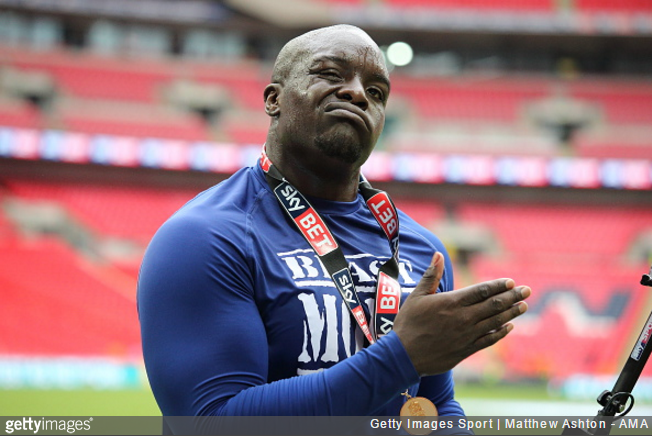 As you might have seen, AFC Wimbledon will be playing in the third tier of English football for the first time in their history (depending who you ask) after coming out on top in the League Two play-off final on Bank Holiday Monday.

The Dons won 2-0, thanks to a late goal apiece from Lyle Taylor and Adebayo Akinfenwa, who promptly revealed that he’d been released by the club shortly after the final whistle.

Captured by the Sky Sports cameras after the match, the beefy forward embraced manager Neil Ardley before yelling “He’s releasing me!” down the lens. He then implored potential suitors to “hit him up on Whatsapp” due to the fact that he is now “technically unemployed”…

In slightly crass scenes, Akinfenwa squabbled with teammate Callum Kennedy over a 101st-minute, injury time penalty that the former duly converted. This was before he seized the opportunity to promote his ‘Beast Mode’ brand during his celebrations.

Speaking to BBC Radio 5 Live,  the 34-year-old apologised to Kennedy for muscling in on the act:

I did promise Cal K that I would let him take the pen, but it was just set up too beautifully and I’m bigger than Cal so Cal’s unlucky.

Sorry Cal K, I love you, though.

I would have usually said I had [the penalty] covered, that I knew I was going to score. But I was nervous.

When it hit the back of the net, it was elation.

It’s hard not to love him, really. The guy’s a definite character, to say the least.