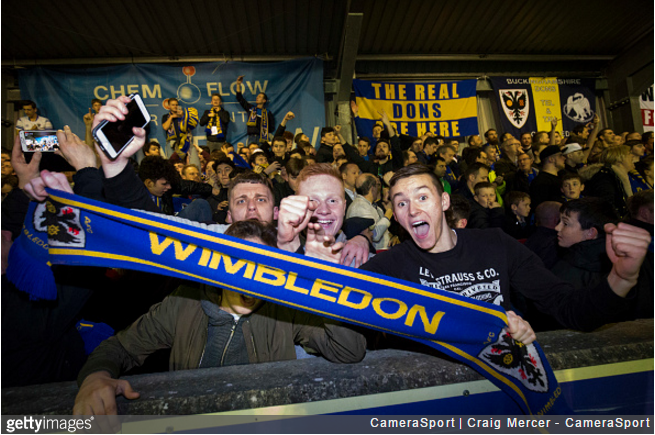 Tuesday night saw AFC Wimbledon ‘welcome’ MK Dons to their Kingsmeadow ground for the first time since the two clubs acrimoniously splintered back in 2002.

As you might expect, Wimbledon didn’t prove to be overly gracious hosts for the League One encounter – in fact, the entire evening proved to be actively hostile.

It began with the home club refusing to allow MK Dons directors and board members into the corporate section as chairman Peter Winkelman (who is largely despised by AFC fans) was made to watch the match from among the travelling fans.

This snub was echoed in the official match programme, wherein Wimbledon barely made any reference to their opponents.

Indeed, the front cover featured the date of the match and the kick-off time, but no mention of who Wimbledon were playing against.

Inside it was a similar story, with the visitors simply referred to as ‘Milton Keynes’ once and once only – on the teamsheet…

AFC Wimbledon ran out 2-0 winners on the night, much to the delight of the home fans, who gleefully chanted “Where were you when you were us?” at their beloved rivals as the final whistle sounded.

If you’re unaware how and why the bitter schism between AFC and MK came about, all the backstory you need is available here.