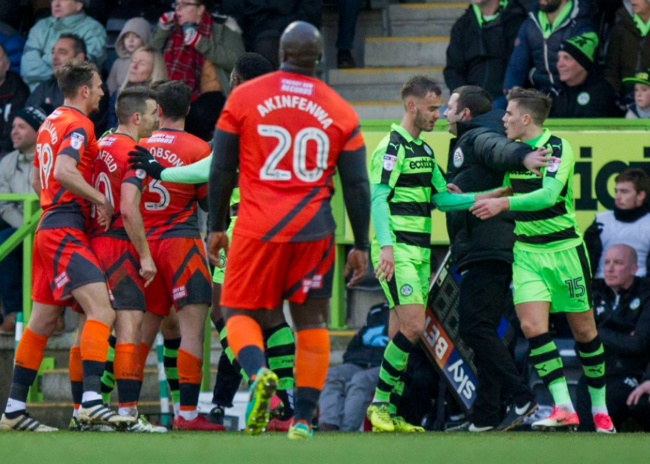 Forest Green Rovers kicked off 2018 by slumping to a 2-1 home defeat against Wycombe Wanderers on New Year’s Day.

League Two’s bottom side struggled to match their high-flying opponents, and things took a turn for the impossible thanks to a unique double-sending-off five minutes before half-time.

The fun started when Rovers midfielder Charlie Cooper was shown a straight red card for a nasty foul on Wycombe counterpart Luke O’Nien with 39 minutes gone.

Rovers manager Mark Cooper then flew into a frothy tizz and, in attempting to defend his son’s honour, found himself also sent to the stands by referee Anthony Coggins.

A father and son sending off for Forest Green; Charlie Cooper saw red for a nasty foul on Luke O’Nien, and boss Mark was sent to the stands for his protests. #FGRvWYC pic.twitter.com/Hnb6qm6kLg

While it may well be a Football League first, we can’t help but feel that the ensuing early bath must have been incredibly awkward.