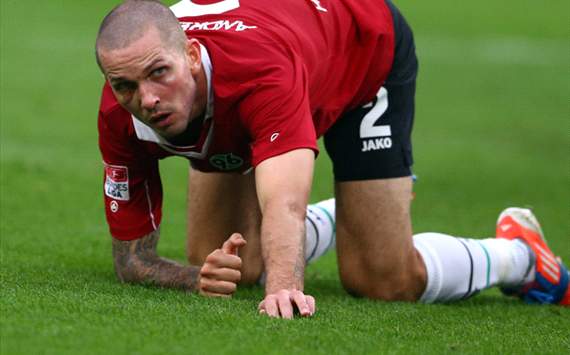 After previously having been laid up injured with a snapped groin for a whopping 28 months (that’s two-and-a-third years in old money) since April of 2010, Hannover midfielder Leon Andreasen – briefly of Fulham – has enjoyed a flying start to the season, scoring six goals (in all competitions) in the space of five rounds of Bundesliga games thus far.

Andreasen, who had to have seven separate operations on his groin during his two-year hiatus, has featured regularly for Hannover so far this term after returning to fitness in August, and started in midfield as his side tanked Nürnberg 4-1 on Wednesday evening – though things turned heartbreakingly sour for the Danish international after only 10 minutes, as he was stretchered from the pitch having ruptured and torn the anterior cruciate ligament in his right knee.

Andreason’s brief statement on the Hannover website has a certain air of the ‘this shit again?’ about it:

“I suspected something was wrong when it happened. It hurt a lot and the diagnosis is no real surprise.

“This is a bitter blow, but I’ve been here before and I have to look ahead. I am sure can come back again.”

The 29-year old now faces a further six months out to recover. So basically, a few games aside, the poor sod’s pretty much looking at 34+ months (MONTHS!) of solid injury rehab. We can only imagine how soul-sappingly crappy that must feel.

Get well soon Leon, and fingers crossed it lasts next time.