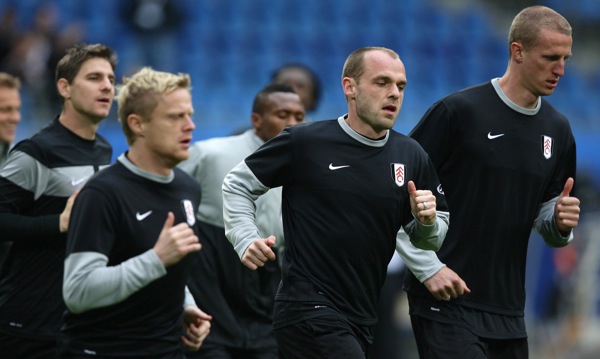 New Liverpool boss Roy Hodgson is a good bloke, clearly, but that doesn’t mean Uncle Woy wouldn’t dare poach a player or two from his former club, Fulham. That’s just the way it works – managers want to work with players they rate and like.

I don’t think Hodgson will pillage the Cottage, but I predict he will sign at least one Fulham star before the beginning of the new Premier League season.

The question is, which one is he most likely to sign?

1. Zoltan Gera – Highly rated by Hodgson, decent squad player to have, works hard, no ego. Would be cheap too and Liverpool could use a couple more wide players.

2. Brede Hangeland – Jamie Carragher is on his way out, and Liverpool need a new brick wall at the back. Hangeland fits the bill and is almost as slow as Carra.

3. Clint Dempsey – Perhaps the most talented Fulham player, Deuce makes things happen. He wouldn’t come cheap, but neither would he break Liverpool’s Yank Bank. If, as seems likely, Yossi Benayoun goes to Chelsea, Dempsey would be a solid replacement.

4. Bobby Zamora – Might turn out to be the perfect foil for Fernando Torres. Has improved immensely but I worry that Liverpool would be a club too far for Row Z.

5. Damien Duff – Now 31 but arguably in the form of his life. Would be a decent squad player to call on.

If I had to bet on just one Fulham player leaving? I’d go for Dempsey, who can fill the hole left by Yossi Benayoun. An American star to please the American owners.

Which Fulham player do you think is most likely to leave for Anfield, if any?

UPDATE: I wasn’t aware that Roy Hodgson’s contract says he can’t sign Fulham players. If so, my bad.