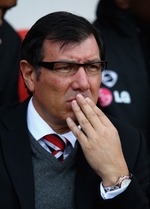 Fulham have gone backwards under Lawrie Sanchez and the club was absolutely right to sack him today. The Cottagers have won just two league games all season and played pretty shit football along the way. They should never have sacked Chris Coleman in the first place, but hey, that bus left a long time ago.
Sanchez’s signings have mostly failed – if anything, he weakened Fulham’s squad. Chris Baird, Hameur Bouazza, Seol Ki-Hyeon, Diomansy Kamaraâ€¦ these players are not good enough to take Fulham into the top half of the table. They are the sort of journeymen you have in your squad in a relegation season. And with Sanchez at the helm for the rest of the season, I think there’s a very good chance that Fulham would have gone down.
Ex-Fulham player John Collins, who resigned as Hibs manager yesterday â€“Â hmm, coincidence? â€“ is the favourite to replace Sanchez.