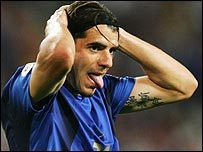 4 During the Fascist era in Italy, which club changed its name to Ambrosiana?
5 Who is the only player to have scored in the Champions League with five different clubs (a bonus point for naming them all)?
6 The club crest challenge:

Answers
1 Christian Chivu
2 AS Roma
3 Simone Perrotta
4 Inter Milan
5 Hernan Crespo: he has scored for Parma, Inter, AC Milan, Chelsea and Lazio
6 Independiente
So how did you fare this week?