Welcome to the Pies’ Festive Fiendish Friday Quiz. It’s a bumper edition, with more fiendishly difficult questions than ever to keep you occupied as you count down the hours before you get to leave work for the Christmas breakâ€¦
1 Slavia Prague, Borussia Dortmund, Liverpool, Portsmouth, Aston Villa (current). Whose career?
2 Which English team does Des Lynam support?
3 Hakan Sukur, Dwight Yorke, Ossie Ardiles, Youri Djorkaeff, Dino Baggio. What links them?
4 Throughout his career, Roberto Baggio was sponsored by which sportswear manufacturer?
5 Picture round: who’s this? 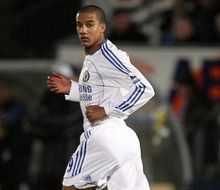 6 What is the largest stadium in Europe (in terms of capacity)?
7 Who’s the youngest ever player to score in the German Bundesliga?
8 PSV Eindhoven – what does the PSV stand for?
9 Which two MLS teams compete annually for the Brimstone Cup?
10 Which British club is currently sponsored by Lithuanian bank Ukio Bankas?
11 Who is Charlton Athletic’s club captain?
12 Who gave Old Trafford its ‘Theatre of Dreams’ nickname?
13 I was born in Dieppe, Normandy, in 1970. I was signed by AS Monaco at the age of 18. I scored the final World Cup goal in the 20th century. Who am I?
14 Who are the only two players to have won FIFA’s World Player of the Year award three times?
15 The club crest challenge: