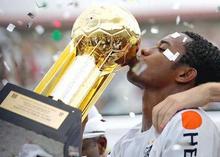 4. Team-mates Romario, Michael Ball, Eidur Gudjohnsen, Park Ji-Sung and Abel Xavier have all played for which club?
5. The fixture Name the two teams (click to enlarge)

6. Who am I? I was born in 1964. I scored all but one of my international goals at a single World Cup finals. I was the first player from my country to play in Japan’s J-League. In 2005, I appeared on the Italian version of TV reality show Survivor.