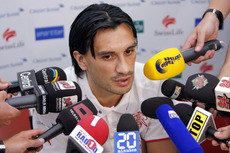 4. Team-mates How many Arsenal players feature in Euro 2008 squads (and a bonus point for naming them all)? NOTE Not including Mathieu Flamini, who is just an injury stand-by for France.
5. The fixture Name the two international teams below: 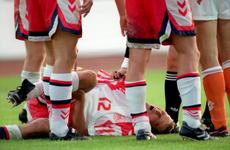 6. Who am I? I was born in Bavaria in 1960. I was once declared bankrupt. I played for SC Freiburg in Germany on three separate occasions. I have an ursine nickname.

Answers:
1. Career path Torsten Frings
2. Multiple choice d) Savo Milosevic (I didn’t believe it either)
3. Picture round Hakan Yakin, of Turkey
4. Team-mates Six. They are: Cesc Fabregas (Spain), Phillippe Senderos, Johan Djourou (both Switzerland), Lukasz Fabianski (Poland), William Gallas (France), Robin van Persie (Holland)
5. The fixture Denmark (white/red) and Holland (white/orange), from the Euro 92 semi final
6. Who am I? Joachim “Jogi” LÃ¶w, German head coach
How did you get on with those?