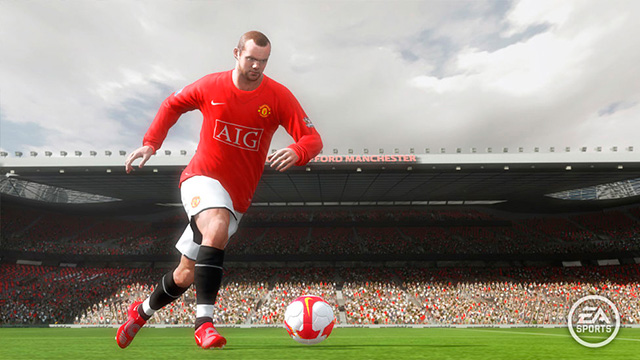 Have been playing FIFA 10 for almost a week now (on Xbox 360). First thoughts (a more detailed review will follow, once I’ve tried out all the game modes):

• FIFA 10 plays like a dream, better than any other football game I’ve ever played – and I’ve played more than a few. This FIFA has finally managed to surpass the satisfying realism that Konami used to do best. Playing as Spurs, for example, I really did notice a huge difference in playing against Arsenal in the Premier League and Crewe Alexandra in the League Cup – it’s not just that one team is a lot better than the other, there is a tangible difference in playing style that is a testament to the game’s programmers. This sense of realism pervades the game – every match you play feels new and exciting; yes, even a League Cup game against Crewe. Much of the credit for this realism must go to the all-new control system, which has at last freed players from the restrictions of the old eight-point compass, in favour of 360-degree dribbling.

• The commentary, courtesy of Sky’s Martin Tyler and Andy Gray, is astonishingly realistic and one of FIFA 10’s strong points. Yes, certain phrases do repeat themselves, but it’s astonishing how natural and convincing the pair’s banter feels, most of the time anyway. It really does make you think that they are actually watching the game you’re playing – which is slightly creepy at first, in a good way. Compared with Lawro’s stock ‘five phrases’ in recent editions of Pro Evo, FIFA seems so polished – Tyler and Gray must have spent a long time in the recording studio, and it shows. The music is also excellent – a lively mix of genres that hasn’t grated on me yet (again, EA scores big over Konami here).

• Playing as Spurs, I can see exactly why managers are reluctant to start with Peter Crouch. As in real life, he’s great on the ball and always a threat from set pieces, but frustratingly pedestrian in open play. Just one small example of how this game has got the crucial details right.

• However, Barcelona probably wouldn’t sign Phil Bardsley. Maybe an EA in-joke, but I did see it happen in FIFA 10. Raised a chuckle.

Initial verdict: For a game to be so instantly playable and yet so potentially deep is rare indeed, but FIFA 10 manages it with remarkable ease. Can’t wait to really get to know its every corner. When I do, I’ll post up another review.