Joey Barton has been talking with the Times’ Matthew Syed. Billed as “the baddest man in British football”, Barton is now “hardman turned philosopher” living in London’s leafy Kew with a young family and burning desires to be a better man. 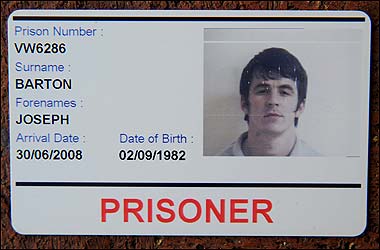 Syed journeys to Barton’s childhood home in Huyton, a few miles from the centre of Liverpool, “where violence was as much a part of his upbringing as oxygen.”

Barton, who at junior level wore the colours of Everton and Liverpool, and played professionally for Manchester City, Newcastle, Marseilles and QPR, is happy to talk.

I started attending a course at Roehampton University last year. I go to lectures every Tuesday and Thursday during term and have become really good friends with Raj [Seghal], the lecturer. I am not saying I am superintelligent, but there is nothing to stop you expanding your mind if you have the focus and discipline. You can learn so much about the world and, even more importantly, about yourself.

My main target is religion. I don’t like the way that it stops people thinking for themselves. I really believe that philosophy should replace religious education on the school curriculum. People should be given the tools to try to understand who they are, rather than simply rely on the words of an authority figure, because that can lead to self-improvement.

Your upbringing and background shape who you are. That is inevitable. When you take a step back, it is incredible the extent to which you are moulded by your past, the experiences you had growing up and the assumptions that were rammed into you in your neighbourhood. Where I came from, violence was the norm. It was respected. It showed that you were tough and would not allow yourself to get walked all over. Where I grew up, it was the law of the jungle.

One small event perhaps symbolises how violence was a way of life. When he was still a child, he was struck by a boy at school. He went home and told his dad. His dad handed him a baseball bat. “Go and hit him. If you don’t, I will give you a good hiding. Unless you fight, unless you hit back hard, you will never get anywhere in this life.”

Football has not just been a way of earning a living. It has also given me an opportunity to move on from my past… Where I grew up, homophobia was normal. There was a lot of racism, too. People were threatened by anyone who was a little bit different. But I have played alongside black players. I have got to know people who are gay. Football has broken down the barriers for me. It helped me to see that the ideas I grew up with were not, like, the absolute truth. There are other ways of thinking about the world. Football, if you like, has been the universal barrier-breaker in my life.

On Never Escaping The Past:

I can still feel the wolf inside. Perhaps it will always be there. But I communicate with that part of my character; I have learnt to accept it and control it. When I feel the anger rising, I have much better coping mechanisms. I have good friends, people I can turn to. I have my family. I have philosophy. I cannot say for certain that I will never make a mistake again. I cannot be 100 per cent sure. But I will do everything possible to do the right thing. I am feeling stronger in myself than ever before.

On Joe For England:

Management is risky. But I am willing to serve my apprenticeship. I recently exchanged emails with José Mourinho about leadership. I am always looking to learn.

You can read it all here.