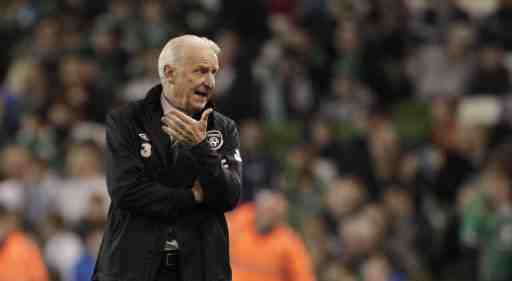 Ever since the Boys in Green performed rather miserably at Euro 2012, all has not been well in the Irish camp, with players moaning in public, throwing strops at airports and generally adding to an air of disquiet around Giovanni Trapattoni’s Irish regime.

A manager stuck in his (quite dated) ways, the legendary Italian has overseen a poor start to the World Cup qualifiers, culminating in that hideous home 6-1 mauling at the hands of Germany. For many, that was the final straw that would see Trap shown the door. However, following Ireland’s subsequent 4-1 win against the mighty Faroe Islands,  a statement released by the Football Association of Ireland on Wednesday evening has backed the 73-year-old former Bayern Munich boss. The statement read:

“While disappointed like everyone with the poor result and performance against Germany and understanding the frustration of some of our supporters, we believe the current position in the group means that qualification for Brazil in 2014 remains a realistic and achievable prospect. We reaffirm that Giovanni Trapattoni is to remain in charge of the national team.”

“The Board recognises the depth of feeling surrounding the team, the performances, the results and the manager, reflecting the passion which everyone in Irish football has for the game and will continue to work closely with the manager.”

While it’s always very easy to criticise managers who have spent their careers learning and improving their craft and in Trap’s case, having a massive success, it has to be said that his continuing failure to properly embrace Ireland’s new crop of talent and his reticence to accept that the game has changed hugely since he was in his pomp makes the FAI’s statement a rather frustrating read for Irish fans such as myself.

However, one wonders how long he’ll last, or indeed if the man himself will decide to jack it in sooner rather than later. As for his successor? Forget Roy Keane, who is a far better talker than he is a doer, surely a certain Mick McCarthy deserves another chance in charge? And if you don’t agree, you can stick it up yer bollix.