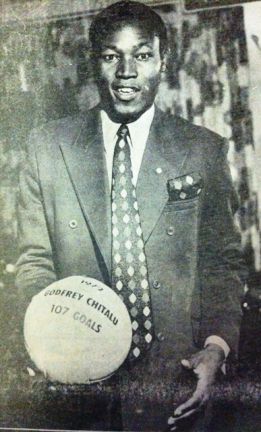 See? It’s written on the ball, so it must be true!

Working in football statistics as I do, in addition to with my humble contributions to dear Pies, one of the most difficult things to accurately quantify is international goalscoring records. With so many official/unofficial/semi-official games taking place around the world, it’s damn difficult to find definitive figures, particularly when dealing with records from outside Europe, where record-keeping can be a less than exact science.

It is within this vague arena, that the Zambian FA have challenged Lionel Messi’s much-publicised record of scoring the most goals in a calendar year. The Argentinian superstar was reported to have beaten Gerd Muller’s long-standing record by bagging his 86th goal for club or country in a calendar year recently. However, according to the Zambian FA, it is not Messi but one Godfrey ‘Ucar’ Chitalu who holds the record with the Zambian striker hitting a whopping 107 goals back in 1972.

A spokesperson from the Zambian FA said:

“Even as the world has been looking at Lionel Messi’s record, breaking Gerd Muller’s, the debate and discussion back here has been why Godfrey’s goals are not being recognised. “

“What we are doing is, we have commissioned an independent team locally to go back into the archives and record minute-by-minute each of those goals. The team that we have put together is going to calculate all of those goals, recording whichever game or tournament they were scored in. “

“We will then send that to CAF (Confederation of African Football) and FIFA so that we can show that, while Messi’s record is there, while Muller’s record is there, the actual record holder in terms of goals per calendar year is actually an African. It’s actually Godfrey Chitalu.”

Chitalu, who passed away in 1993, was a five-time Zambian footballer of the year and is reported to have warmed up for his record-breaking feat by bagging 81 goals for Kitwe United in 1968 before ultimately smashing that tally four years later. Alas, Chitalu’s record was never acknowledged by FIFA, which may be down to a genuine scepticism over the stats or maybe even an inherent racism. Who knows!

Anyway, in many ways, I hope Chitalu is eventually awarded the record. After all, surely Messi has received his fair share of adulation and awards already?