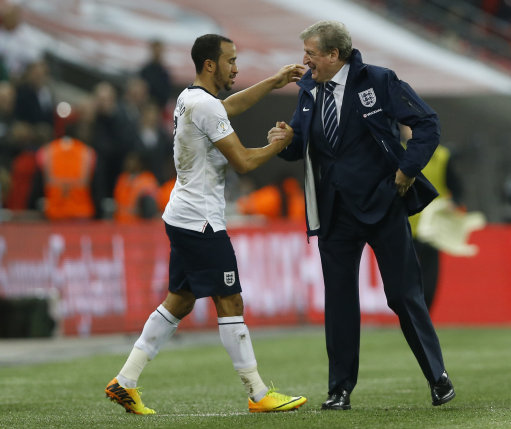 See? This is why we can’t have nice things! Days after qualifying for the World Cup, the English press have already sought to prick the bubble of happy thoughts by kicking up a stink around a rather anodyne joke made by Roy Hodgson at half-time during the Poland game.

Here’s the joke in full:

“NASA decided they’d finally send a man up in a capsule after sending only monkeys in the earlier missions.

“They fire the man and the monkey into space.

“The astronaut takes umbrage and radios NASA, ‘When do I get to do something?’

The “issue” apparently being that Hodgson was supposedly using “feed the monkey” as an analogy for “pass to Andros Townsend”.

Several newspapers (notably good old Ollie Holt in the Mirror) are reporting that at least one, unnamed England player in the dressing room was “shocked” at the racial implications of Hodgson’s joke, though our cynical minds would suggest that maybe they’re probably only reporting that to justify making a story out of it.

Hodgson then used his press conference yesterday to publicly apologise for causing any offence, not that – by Andros Townsend’s own admission – he had done anything of the sort:

“I would like to apologise if any offence has been caused by what I said at half-time. There was absolutely no intention on my part to say anything inappropriate. I made this clear straight away to Andros in the dressing room.

“I also spoke to Andros again on Wednesday. He has assured me and the FA he did not take any offence, and understood the point I was ­making in the manner I intended.”

Indeed, Wayne Rooney was first to issue an incredulous Tweet in which he protested that the England manager had “done nothing wrong”, which was swiftly followed this morning by a Tweet from Townsend himself…

I don’t know what all this fuss is about. No offence was meant and none was taken! It’s not even news worthy!

Well then, that’s probably the last we’ll hear of it, eh?