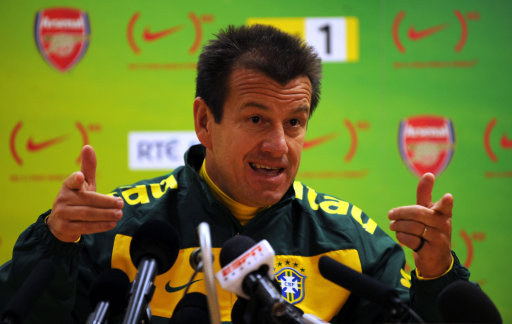 Like a cigar-chewing, crew-cutted drill sergeant, new Brazil coach Dunga has been laying down the law to his Selecao, indirectly informing the likes of Dani Alves and Neymar that flouncy crap like dyed hair, branded baseball caps and crying will no longer be permitted on his watch.

Speaking to Globo (via Sambafoot), Dunga outlined his new, less airy-fairy; more militant vision for the Brazilian national team, beginning with the thorny issue of letting players dye their hair during a major international tournament.

“I would not have permitted them to dye their hair while with the national team at the World Cup,” Dunga ranted.

“Do it before, or do it after, but not when you should be thinking about the World Cup.”

Dunga then turned his attention to the NJR-branded caps that Neymar chose to wear during several press conferences at the World Cup.

“Either you where a Brazil hat, or you don’t wear a hat at all.”

Then came the issue of the hideous faux-mourning of Neymar after his tournament was ended by a back injury: the “Forca Neymar” caps and t-shirts, the weird outpouring of grief, etc.

“The message transmitted was: we have lost a soldier.

“But if you go to war you cannot be crying about the loss of one solider – you must give strength to the solider who takes his place.”

And last but not least, his national team will not be allowed to cry, because crying is for girls.

“A crying scene like the match against Chile is negative in a world such as football. We are macho, sexist, and we have this idea that men do not cry.”

Things are about to get fun in Brazil, and we’re talking “Roy Keane” fun.