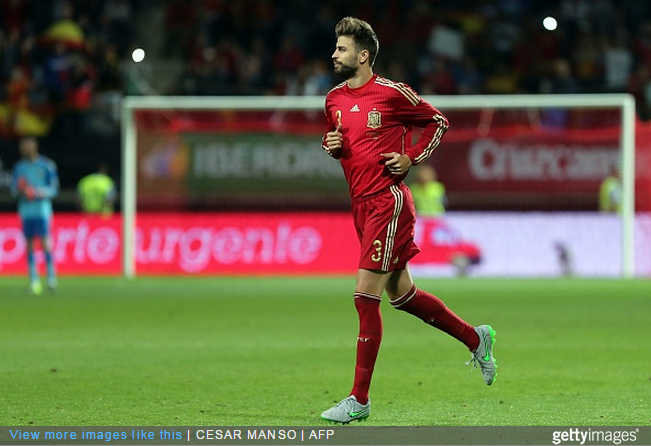 The Spanish Football Federation (RFEF) have announced that their upcoming international friendly against England will no longer be played at the Bernabeu due to concerns over crowd hostility toward Gerard Pique.

The game, coming up on 13th November, was due to be staged at Real Madrid’s 85,454-seater stadium but has now been relocated to the 30,000-capacity Jose Rico Perez stadium in Alicante, home to Hercules CF.

A statement from the RFEF read:

In the event that Spain qualify directly for Euro 2016, they will face England in an international friendly that will take place at Alicante’s Jose Rico Perez stadium on Friday, November 13, using a FIFA date.

While no specific mention of the Pique situation was made, AS are reporting that the RFEF were keen to switch venues because of fears that the Barcelona defender would be booed and jeered by the Madrid crowd over his staunch and public support of Catalan independence.

Pique was heckled throughout Spain’s Euro 2016 qualifier against Slovakia in Oviedo on Saturday and the RFEF are certain that he’ll come in for an even heavier slanging in Madrid.

Indeed, allied to his political stance, Pique is also reviled by Real Madrid fans for the manner in which he celebrated Barca’s title win at the end of last season, during which he had a minor dig at Cristiano Ronaldo and his ill-timed birthday party.

Good to see everybody is behaving like adults about this, no?