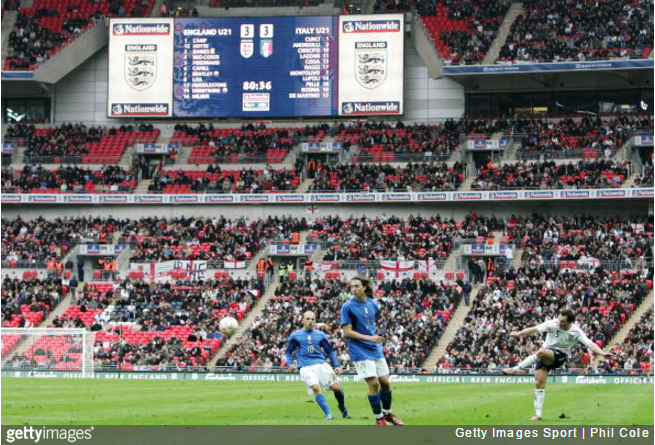 On 24th March 2007, the new Wembley Stadium finally hosted its very first game after years of delays and set-backs.

The inaugural contest was an Under-21 friendly between England and Italy and a crowd of 55,700 sidled into the cavernous stadium to watch.

On the bench, among others, were Joe Hart, Liam Ridgewell, James Milner, Lee Cattermole, Cameron Jerome and Matt Derbyshire.

With England desperate to draw first blood at their new home, it should come as no surprise that Pazzini opened the scoring for Italy after just 29 seconds…

Aged 20 at the time, Pazzini went on to bag a hat-trick on the day. The striker eventually racked up 160 goals in 12 years with five different Italian club sides. He’s currently plying his trade alongside fellow ex-Azzuri hitman Luca Toni at Hellas Verona.

The match itself ended in an entertaining 3-3 draw; England’s scorers being Bentley, Routledge and Derbyshire.

Bentley was widely tipped as a successor to David Beckham on England’s right flank but, despite an outstanding season or two at Blackburn and a sprinkling of notable moments elsewhere, fell short of the mark before his career began to peter out fairly rapidly. He retired from football aged 29 in 2014 stating that he’d fallen out with the game.

Routledge never received a senior call-up but is still playing regular Premier League football at Swansea at the age of 31 having enjoyed fair-to-middling spells at six other English clubs in the meanwhile.

Derbyshire currently plays up front for Rotherham after hit-and-miss spells at Nottingham Forest, Blackburn and a slightly erroneous stint with Greek side Olympiacos.

That said, the gangly forward was awarded the Man of the Match award for his contribution to the team’s Greek Cup Final win in 2009, so he must have been doing something right.