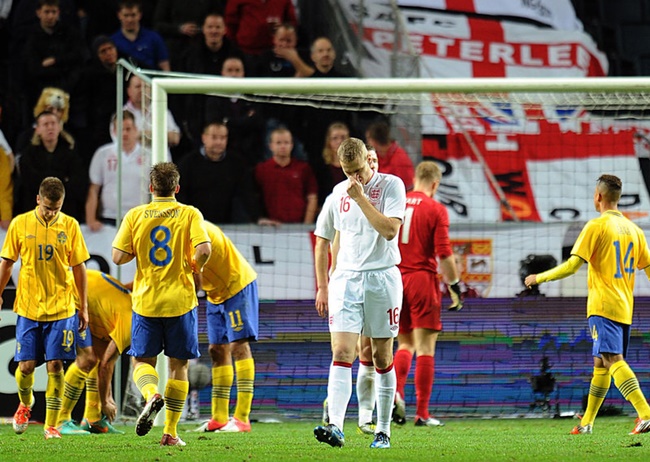 Ryan Shawcross has revealed that his family still taunt him after the Stoke City defender saw his England debut in 2012 well and truly ruined by one man.

That man was Zlatan Ibrahimovic, who scored four goals in a landslide 4-2 friendly victory for Sweden in Stockholm.

England were 2-1 up when Roy Hodgson sent Shawcross on in the 75th minute. Ibrahimovic then set about helping himself to three more goals in the space of the final 13 minutes to seal the victory for the hosts – the last of which being that overhead kick in stoppage time…

It was the first and last time Shawcross was selected for international duty and, speaking to The Telegraph, the Stoke captain confessed that even his nearest and dearest haven’t let him forget about the night his short-lived England career came to a blunt halt.

I’m the butt of the joke in my family, just because the 10 minutes I had in international football was ruined by one man.

They are consistently saying that Zlatan ruined my career! I had a chance and I don’t think many other defenders have stopped him.

I was given 10 minutes to show what I could do and probably didn’t provide a good enough performance.

I was against one of the best strikers in the world who was on a hot streak at the time and these things happen.

Asked if he harbours any plans on forcing his way back into the reckoning, Shawcross admitted that he doesn’t see a way back in while Hodgson is still in charge:

I’ve been playing well for the last three or four years and I don’t seem to be getting in so I can’t see it changing in the future unless the manager changes.

It’s just the way football is, some managers like players that others don’t.

At the moment it’s either that he doesn’t think I’m up to it or the lads he’s picking are better than me. That’s fine.

While there’s a definite perception that Shawcross is little more than a thick-necked thug among certain fans, he always seems to come across as a thoroughly decent, sensible chap in what little press he does.

Allied to that, he’s definitely curbed his hard tackling and taken a more responsible approach to physical defending since the whole ridiculous Aaron Ramsey fall-out.

That said, it’s definitely doubtful that we’ll ever see him back in an England shirt given his age and the other, younger, altogether more fashionable options currently emerging.

Unfortunate, then, that the way it all ended was so harsh and abrupt.