Milan’s goalkeeping prodigy Gianluigi Donnarumma found himself the target of angry Rossoneri fans during Italy’s Euro U21 Championship clash with Denmark on Sunday.

The 18-year-old made his debut for Milan at just 16-years of age and has established himself as one of the hottest goalkeeping talents in the game.

However, after initially pledging his allegiance to his boyhood club, the teen star now looks likely to leave the club after reportedly turning down a hefty £80,000 a week new contract. 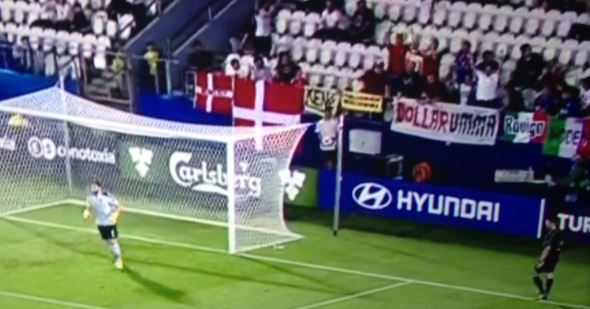 During Italy’s U21 clash with Denmark, Milan fans behind Donnarumma’s goal displayed a ‘Dollarumma’ banner before throwing fake money at the object of their anger.

However, the likes of PSG, Real Madrid and the Red Devils themselves are also reported to be interested in the gifted glovesman.