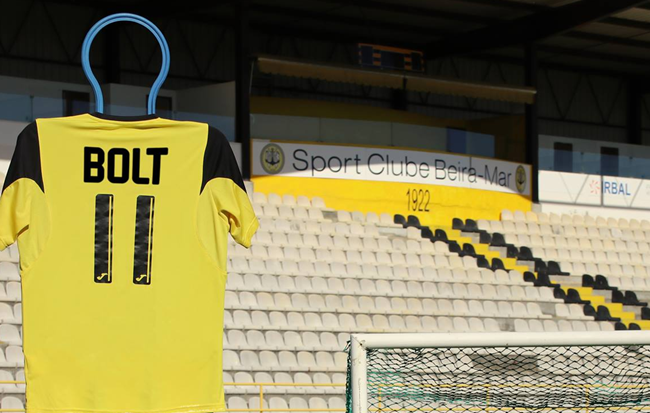 After retiring from athletics at the end of the World Championships in London, Usain Bolt has rather curiously appeared to attain ‘free agent’ status in the world of football.

Of course, it stands to reason that Bolt was immediately linked with a move to Burton Albion, but sadly party-pooper manager Nigel Clough has since laughed off suggestions of the Jamaican sprinter going on trial at the Brewers.

Next in line to try their luck are Portuguese club Sport Clube Beira-Mar, who are based by the beach in Aveiro and have cobbled together a tantalising contract offer and submitted it to Bolt via their official Facebook page.

Allow us to translate Beira-Mar’s speculative offer in its entirety:

Being Sport Clube Beira-Mar, a club where dreams come true, we announce that we are available to fulfil the dream of one of the best athletes of all time!

We are aware of the importance of this step [in your career] and so we risked everything to offer you the best of contracts.

Here are the conditions we have for you:

– The honour of wearing our jersey.

– The best fans in the world.

– Three bifanas (pork sandwiches) and three burgers from local restaurants (with the right to sauce, but without french fries)

– 12 Ovos Moles (a local egg-based confectionery) per day, if nobody eats them in the morning in the locker room.

– One case of Imperial beer per week.

– A selfie stick (for your photos, to tell the whole world that Venice is the Aveiro of Italy!)

– A telephone with Portuguese contacts: President Marcelo (who will greet you when you arrive) and numbers for organising parties.

– All the beer you can drink at the stadium bar.

PS: Training has already begun and your gold medals will not serve you much when called-up.

Quite honestly, we’d have bitten their hands off at the first mention of bifanas.