If you’ve ever fancied treating yourself to a bona fide piece of South American football memorabilia, then you may be interested to know that the actual Copa America Centenario trophy is currently being flogged on eBay.

The Centenario tournament was staged in 2016 in celebration of the 10oth anniversary of the inception of the Copa America. The trophy was eventually won by Chile, who beat Argentina on penalties in the final.

The vast golden urn, one of four versions of the trophy, has since found it’s way onto the auction site, with bidding starting at $75,000 (approximately £56,000)… 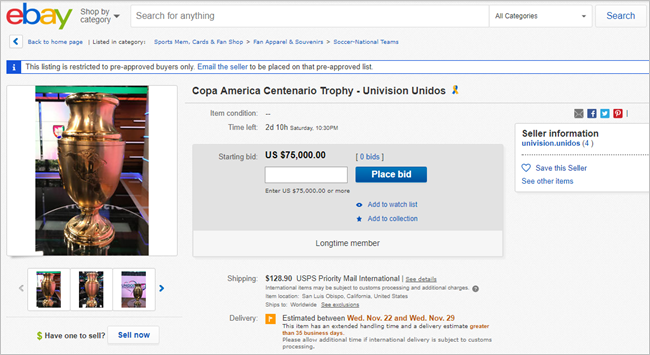 The sale has been organised by South American broadcasters Univision, with every single cent of the final value received being donated to the American Red Cross.

The buyer will not only support the efforts of the Red Cross, but will also own an invaluable piece in the history of world soccer.

Bidding is currently live on eBay if you have (at least) $75,000 going spare and a hankering for an enormous, vastly elaborate new spittoon.