Ugh. Just when you thought you’d witnessed an untainted bit of genuine sporting drama, the ugly premeditated corporate-funded truth bubbles to the surface to spoil it.

Tim Cahill scored his 49th and 50th goals for his country as Australia squeaked past Syria in the Asian play-offs to keep their World Cup qualification aspirations alive.

Such is the done thing, Cahill celebrated his goals, though not with his trademark corner flag jousting, but by weaving around using his arms to simulate ‘aeroplane wings’ before making a ‘T’ sign with his hands.

Turns out, the Socceroos skipper had been sponsored to celebrate thus by holiday company TripaDeal, of which he is a brand ambassador. 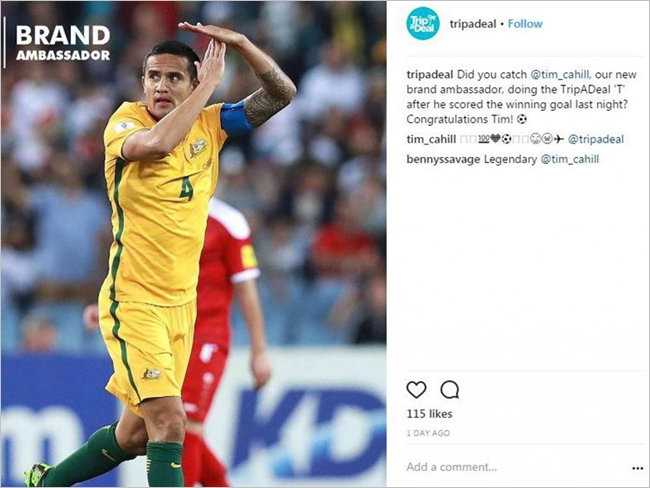 As can be seen above, Cahill duly responded to TripaDeal’s Instagram post with a series of plane emojis. Gah.

Dismal stuff, in actuality, that appears very similar in nature to the elasticated hi-jinks that saw Nicklas Bendtner stung by UEFA to the tune of £80,000 for bearing his underwear waistband after scoring for Denmark at Euro 2012.