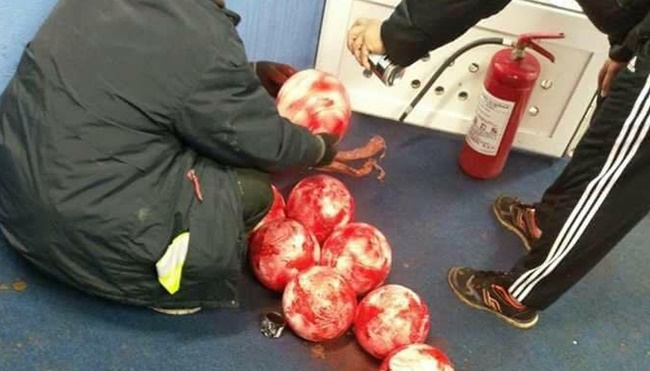 Despite the best efforts of the Zeljeznicar club staff, heavy snowfall led the match to be postponed shortly before kick-off after referee Irfan Pejtom deemed the surface at the Grbavica Stadium to be unplayable.

The officials also seemingly filed a concern with the Bosnian FA (NFSBiH) that Zeljeznicar were not able to provide high-visibility fluorescent match balls for use in the blizzard-swept conditions. 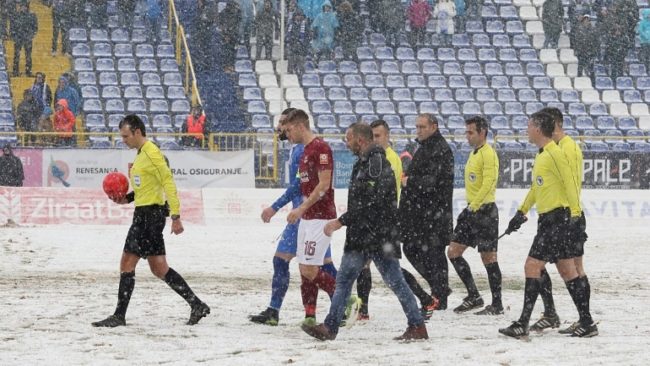 Referee Irfan Pejtom carries one of the sprayed balls as he inspects the pitch (Photo: FK Sarajevo)

Zeljeznicar attempted to solve the problem by buying a can of red spray paint and manually refinishing their balls, only for Pejtom and his team to take umbrage.

In a statement issued on Sunday evening, Zeljeznicar attempted to explain their botched plot to paint their balls, insisting that they only did do so because the match officials told them to:

Given the question of the existence of a snow ball for the game, we would like to point out that the competition can only be played by the official balls that were delivered by the NFSBiH at the beginning of the season.

According to the order of the officials, the existing white balls were reddened in red (paint).

In addition to the above, FK Zeljeznicar did everything that was ordered during the match preparation, so the pitch was first marked with white lines and then with red.

However, due to the intensity of the snow, the terrain could not be cleaned.

Basically, they burned through about £200 worth of red paint for absolutely no good reason.

Such is life in Sarajevo.