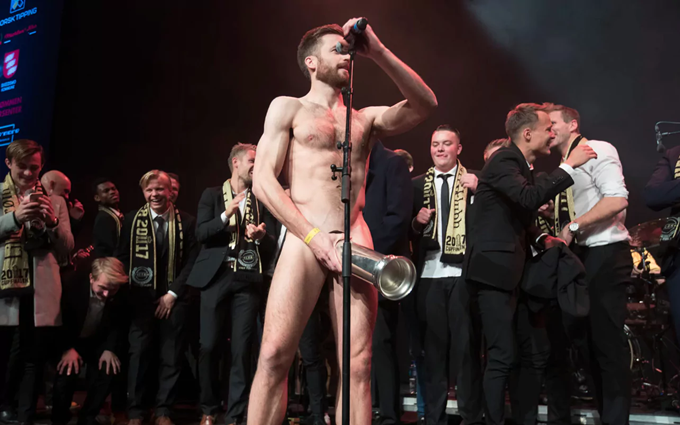 Aleksander Melgalvis Andreassen has issued an apology after his celebration of Lillestrom’s win over Sarpsborg in the Norwegian Football Cup final proved to be a little too ‘zealous’ for some people’s liking.

After playing his part in the 3-2 victory on Sunday afternoon, Melgalvis appeared on stage at Lillestrom’s trophy presentation the following day in a state of complete and total undress. He then proceeded to use the silverware to cover his giblets.

Upon being faced with the images, Norwegian FA communications director Yngve Haavik was not best pleased (via Telegraph).

Winning the Cup is a big thing and obviously it should be celebrated. But it is very possible to do so in a manner that shows the cup a bit more respect.

I am sure it wasn’t intentional from Melgalvis but it came out the wrong way regardless. I think Melgalvis and Lillestrom agree with that.

I can understand [why people are upset]. Should I apologise to the king? Well, I was very privileged to say hello to the king yesterday so maybe I should apologise today.

Pies have picked through Melgalvis’ response and, you know, we’re detecting just the faintest miasma of sarcasm.

After all, if a man can’t cast off his clothing and jig around with his cobblers in a trophy after winning the Norwegian Cup, then when can he?