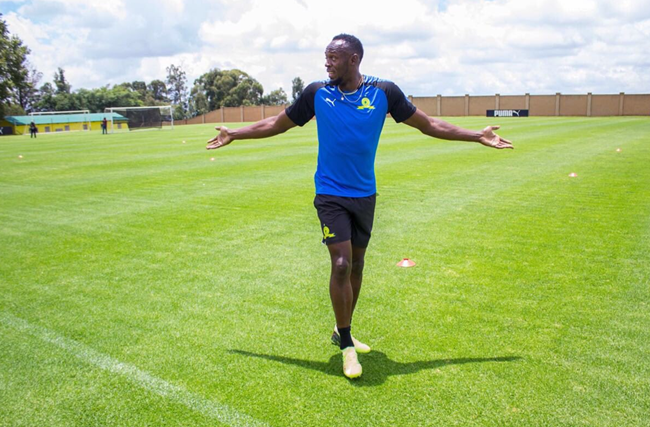 Usain Bolt sent a wave of anticipation across the more gullible plains of social media yesterday when he announced that he’d signed for a football team and that we’d all find out just which one at 8am on Tuesday morning.

Having trained with Borussia Dortmund and openly begged for Manchester United trials in the past, it’s fair to say that everybody(ish) was on tenterhooks(ish).

I've signed for a football team! Find out which one this Tuesday at 8am GMT 👀 pic.twitter.com/iFTlWxfy7x

The Olympic sprinter then stoked the fires by posing for a few photos wearing Mamelodi Sundowns training kit, only to underwhelm the waiting world when the time came for the big reveal…

Excited to announce that I will be playing in @socceraid for @UNICEF_uk 2018 at Old Trafford on Sunday 10th June. Make sure you’re ready @robbiewilliams! ⚽️🌍 pic.twitter.com/t2sDB1iLP8

Yep. The Jamaican will be captaining the ‘Rest of the World’ team at this year’s Soccer Aid match, taking on an esteemed footballing mantle previously occupied by Gordon Ramsey and actor Michael Sheen.

All hype and what we’re actually being treated to is Bolt sprinting in straight lines on a football pitch while plasticine pop star Olly Murs does his best to keep up and Jonathan Wilkes emerges from obscuro-stasis to take it all far too seriously… again.