The Greek Superleague clash between PAOK and AEK Athens had to be abandoned with mere minutes left on the clock when PAOK’s club president came striding onto the pitch with a gun.

After watching his side have an 89th-minute goal disallowed, an irate Ivan Savvidis invaded the pitch with a pistol tucked into a hip holster.

The AEK players were then ushered from the pitch for their own safety while Savvidis was intercepted by security staff. The match was then officially scuttled two hours later. 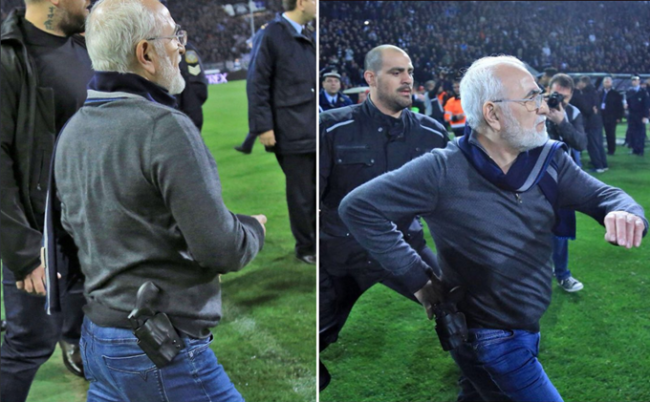 According to Ekathimerini, AEK have since accused Savvidis of “terrorism”, claiming that the PAOK president yelled “you’re a dead man” at referee Giorgios Kominis – a threat which carries a little more weight if you happen to have a firearm about your person.

Both PAOK and AEK (and Olympiakos) are vying for the Greek title, though only after the former club had a points deduction (for fans throwing paper rolls at Olympiakos coach Oscar Garcia a fortnight ago) controversially overturned hours before kick-off.

Before Sunday’s debacle, PAOK had been third in the table, just five points behind AEK at the summit.

However, that gulf is now almost certain to be increased beyond the point of contention when the punishment for Savvidis little armed adventure is metered out by the relevant authorities.