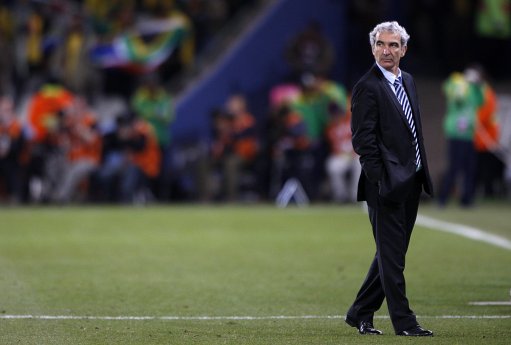 Despite turning the French national team into a quivering globule of merde during his six years in charge, Raymond Domenech is seeking £2.5 million in compensation from the French Football Federation (FFF) after he was sacked following Les Bleus disastrous showing at the 2010 World Cup.

Domenech was due to be replaced by Laurent Blanc after the tournament anyway but a mutiny, training boycott and a refusal to shake South African manager Carlos Alberto Parreira‘s hand after a game saw him jettisoned prematurely, although it would seem that he is suing on grounds of being made the ‘political scapegoat’ for France’s failings by the FFF:

“There is no acrimony, no animosity,” said Domenech’s lawyer Jean-Yves Connesson in an interview with RTL Radio.

“Monsieur Domenech is simply surprised that there was a political decision taken by the federation, which is separate and in defiance of their code of conduct, to allocate personal responsibility for a collective crisis.

“Considering the extremely harsh conditions and the seniority of my client, we will demand the severance payment due to him as well as three years of salary, a lump sum of €2.9 million euros (£2.5 million).”