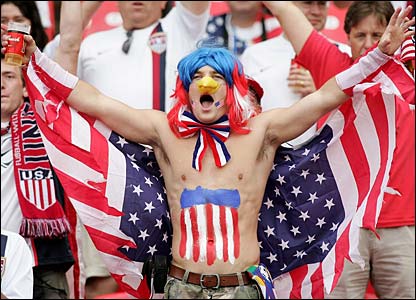 I’m in two minds about the very real possibility of the US of A becoming a major force in world football in the next decade. This summer’s Confed Cup has shown that America has the potential to compete with the likes of Brazil and Spain, and although I still think they have no chance to win next year’s World Cup, I guess they could realistically reach the quarter finals, maybe even the last four (unlikely, I know).

Part of me thinks it’s great that the game is growing in the world’s biggest market, but I suppose there’s a selfish part of me that likes the fact that there is a major sport that America can’t say it’s the best at. Yanks (I say that with some affection, honestly), you can keep your baseball and basketball, and that other form of football in which you hardly even use your feet; just don’t mess with the beautiful game. We don’t want quarters or time-outs, thank you very much. And we don’t want the World Cup to become the World Series. Irrational concerns maybe, but you never know what might happen if the major American TV networks get hold of the game.
Do you want the USA to become a genuine world power, or are you happy to see them scratch around in the second tier of the international game? Vote below or leave a comment…