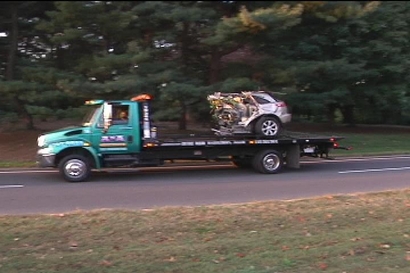 News breaking that Charlie Davies was involved in a serious, one-car crash on the Washington Parkway (see photo of wreckage). A female passenger involved in the accident died, and Davies – one of two crash survivors; it’s unknown if he was driving the SUV – is currently in hospital, having surgery on injuries that are not reported as life-threatening. However, a spokesman for the US Soccer Federation did say the injuries were “possibly” career-threatening.

Davies, 23, who plays for Sochaux in France, was seen as a future star of the US men’s national team, but it remains to be seen how the crash will change that. Get well soon, Charlie.