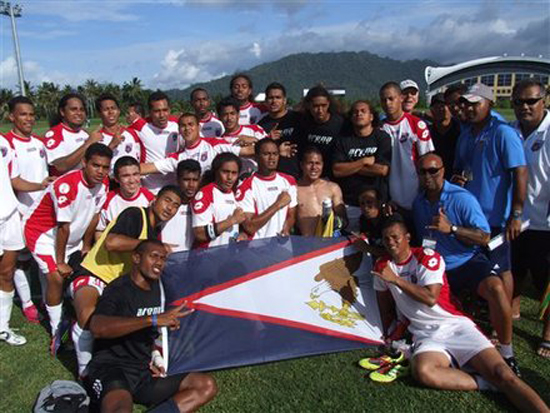 Ranked joint-bottom of FIFA’s world rankings (204th), with a score of zero points to their name, American Samoa went in to a World Cup Qualifying clash against Tonga (ranked 202nd) as underdogs. However, defensive player Johnny ‘Jayieh’ Saelua, making his debut, would help make history for the most minnowy of all minnows for two reasons.

Firstly, in beating Tonga 2-1, American Samoa registered their first-ever competitive victory, and secondly, the team became the first in world football to field a transgender player (Saelua) in an official match.

Apparently, Saelua is part of the fa’afafine, biological males who identify as a third sex, that is widely accepted in Polynesian culture. The tough-tackling defender played a blinder in the game, winning man of the match (insert clichéd “don’t you mean ‘woman of the match'” unfunny ‘banter’ here).

Saelua said: “The team accept me and we have that mutual respect. Which is great. It’s all part of the culture.”

American Samoa’s coach Thomas Rongen could’ve been a little more enlightened when he commented on Saelua’s inclusion in the team: “I’ve really got a female starting at centre back,” he said. “Can you imagine that in England or Spain?”. However he did raise a very pertinent point. How would Premier League fans react to a player like Saelua playing in their league?

If you think the world of football is still in the dark ages over gay players, then just imagine how far down the list of priorities transgender players and fans are in FIFA’s to-do list. Therefore, the appearance of Saelua is an historic and extremely positive step for the game. Ironically, the game was played at the JS Blatter Field. One shudders to think what Sepp would say about the historic game.

Still, well done American Samoa (who should now leapfrog the likes of San Marino, Samoa, Monserrat and Andorra in the rankings), and well done Johnny Saelua.