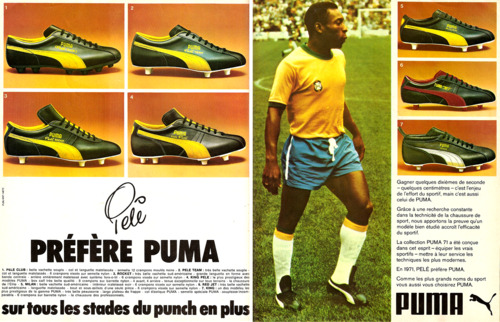 Designed and first launched in 1968, the Puma King first came to worldwide prominence two years later when Pele sported a specially-crafted pair – the ‘Puma King Pele’ – at the 1970 World Cup in Mexico.

The story goes that Puma paid Pele $120,000 to sport the signature boots (it was the first primordial boot deal of its kind) with the only proviso being that the Brazilian striker make sure he attracted as much attention to his signature footwear as possible – leading to the famous scene that saw the 1970 ‘Player of the Tournament’ ask the referee to stop the match minutes before the final whistle in order to tie his laces, fully aware that the television cameras would be broadcasting a close-up image of the new King Peles around the world…

While Pele was allowed to swan about in his black and gold pair, the original Puma King came in good old-fashioned monochrome – black and white (with subtle accents of gold added over the years), instantly recognisable and the choice of boot for the likes of Eusebio, Johan Cruyff, Lothar Matthaus and Diego Maradona among many others.

Quite the honour roll.

Lest we forget, this was before it was commonplace for companies to pay out top dollar for players to hawk their wares. Eusebio, Maradona, Cruyff (who tore one of the Adidas stripes off his Holland shirt before the 1974 World Cup Final in a show of allegiance to his brand of choice) Matthaus et al chose Kings not because they were being paid to, but because they were preferential, better. 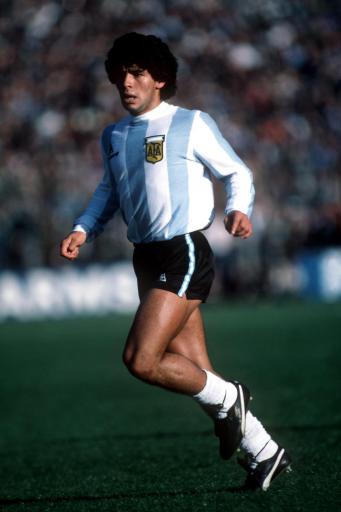 Diego Armando cuts a dash in his Kings

To this very day, the King design has hardly changed. Since the early 1990s, in fact, the design has barely fluctuated at all – black, white, gold, beautiful.

I owned a pair fleetingly as a kid, swapped with a lad down the road for a quick-release bike wheel. Having only ever seen the pros wear Kings, I was incredibly eager to complete the transaction, but sadly the boots were knackered when I got them (the toes were already threadbare and about shot) and so I was never really able to appreciate them fully before ditching them.

Such is life, full of regret and lament… and con-man neighbour kids. 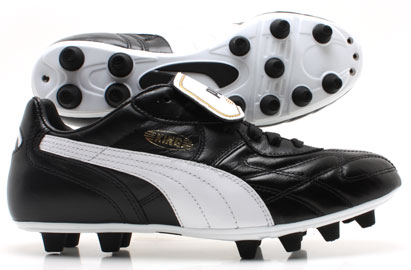 Of course, there have been special models, contemporary tweaks and some garish colourways of late but the original, classic design – the grain of sand at the centre of the Puma King pearl – remain utterly timeless.

Football Boots We Have Loved: The Original Nike Tiempo