@OfficialWolves my new shirt just delivered…..can you see the error? Is this why theyre 12quid at moment? Shite pic.twitter.com/ZebRRpm5sc

Having purchased and taken delivery of a discounted replica shirt from the online club shop, Wolves fan Richard Gough opened the parcel to find that his new jersey was faulty – with the Wolves crest sewn on to the shirt the wrong way round.

The following day Richard received a response from @OfficialWolves and a fantastic bit of correspondence it was too, as the club poked fun at themselves by Tweeting him a sincere letter of apology which was also written upside-down on official club stationery… 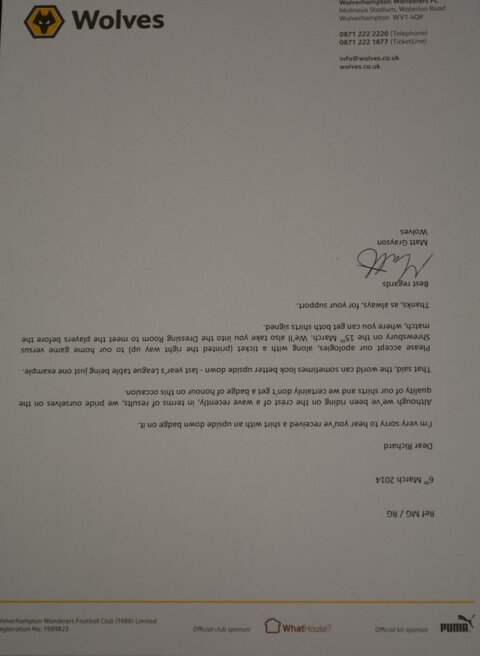 I’m very sorry to hear you’ve received a shirt with an upside down badge on it.

Although we’ve been riding on the crest of a wave recently, in terms of results, we pride ourselves on the quality of our shirts and we certainly don’t get a badge of honour on this occasion.

That said, the world can sometimes look better upside down — last year’s league table being just one example.

Please accept our apologies, along with a ticket (printed the right way up) to our home game versus Shrewsbury on the 15th March. We’ll also take you into the Dressing Room to meet the players before the match, where you can get both shirts signed.

Thanks, as always, for your support.

(Via Express And Star)