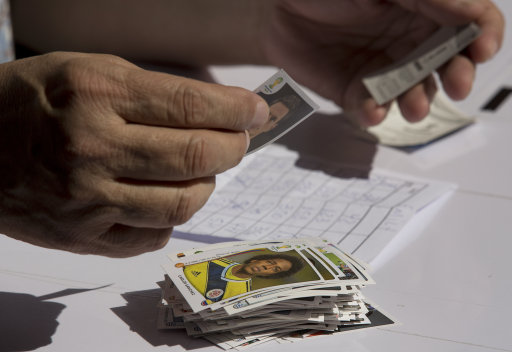 Matthew Scroggs, a secondary school teacher from West London who was presumably at something of a loose end, has crunched the numbers and calculated the minimum amount of stickers (as well as the total cost) that you will have buy in order to complete the Panini 2014 World Cup sticker album.

The official album consists of 640 stickers, with Scroggs calculating that the average collector can expect to have to purchase 4,505 stickers (that’s 901 single packets) in order to fill the entire book.

Apparently, the figure is so high because it, in Mr Scroggs’ own words, “determines the probability of accruing duplicates and excludes the possibility of swapping those duplicates with other collectors.”

“I was sticking stickers in my album and wondering how many I would need to buy. Once I’d worked that out I carried on and worked out the cost… then I raided my savings account.

“I haven’t been put off by my findings at all though. Partly because I excluded swapping stickers and ordering the last ones online, so I’m hoping the actual cost will be a lot less.”

There are extenuating factors, however, with Panini’s website offering collectors to hand-chose and then purchase their final missing 100 stickers, which negates the chance of buying duplicates and therefore significantly reducing the cost of the whole endeavour – down to about £133.99, according to Mr Scroggs’ calculations.

Also, a shrewd collector should be able to get the most out of their swapsies by trading with other Panini collectors in time-honoured fashion – potentially reducing the total cost even further.

We can’t help but feel that Mr Scrogg’s may have sapped all the fun out of sticker collecting here, but we certainly hope his findings help someone out there reach ‘completion nirvana’.