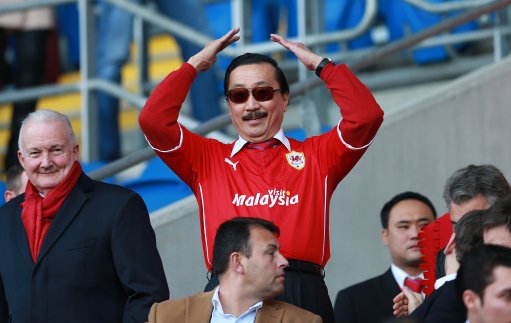 “It was just f**kin’ banter mate. Deal with it”

It’s not quite official yet but Cardiff City are close to reverting back to playing in blue home shirts after owner Vincent Tan.

(UPDATE: It’s official now. Vincent Tan has just released a statement – in which he quotes JFK – on the Cardiff City website to confirm as much.)

After 114 years in blue, Tan infamously changed the club colours to red in 2012 as that was a colour he deemed “lucky”.

As well as altering the shirt colours, the Malaysian also re-jigged the Cardiff club crest, sidelining the Bluebird in favour of plonking a large red dragon front and centre.

The changes angered fans, who (quite rightly) opposed having their club’s historic identity pulped on a whim, with many fans observing an organised boycott of last Friday’s FA Cup third round game against Colchester – a fixture which attracted a meagre attendance of a sliver over 4,000.

However, after years of sustained protest from the supporters of his club, it seems Tan is now on the cusp of reversing his re-brand after a meeting between Cardiff board members and aggrieved fans.

“Tan was not at the meeting which was convened following ever-growing bitterness at the club’s colours […] but on Friday morning, the Malaysian spoke to members of the board who had talked with the supporters – including chairman Mehmet Dalman and the chief executive Ken Choo – and agreed with their recommendations for an immediate switch back.

“Approximately 50 supporter representatives, local MPs and business leaders addressed the board and made a seemingly compelling case for an end to the red which has caused such acrimony and a return of the bluebird as the dominant image on the club crest.”

According to the Tele, since Tan “gave the green light” to revert to blue, Cardiff have been in talks with the Football League about the possibility of playing in their old colours (presumably their current blue away kit) in this coming Saturday’s home game against Fulham.