Milan fan Antonio Dell’infante is perhaps understandably besotted with Filippo Inzaghi having grown up watching Super Pippo banging in goal after goal after goal for his beloved Rossoneri.

It’s an image forever emblazoned in the mind’s eye of football fans of a certain vintage: Pippo, half-beserk, on the very edge of tears and flailing away to the corner as if he’d just stepped barefoot on a Lego brick before applying the finishing touch. Goals mattered to that man.

Anyway, in order to prove his love for his Milan idol, our Antonio got himself a tattoo. A rather large tattoo as it happens.

He then posted a photo of his new back mural along with a message that read, among other things:

“[Dearest Pippo,] To me you are and always will be the best player in the world. The player whenever marked, made me move and cry.

“Everything I did it for you, because it will never forget you.”

He’s not fibbing either. Just hark at the size of that thing… 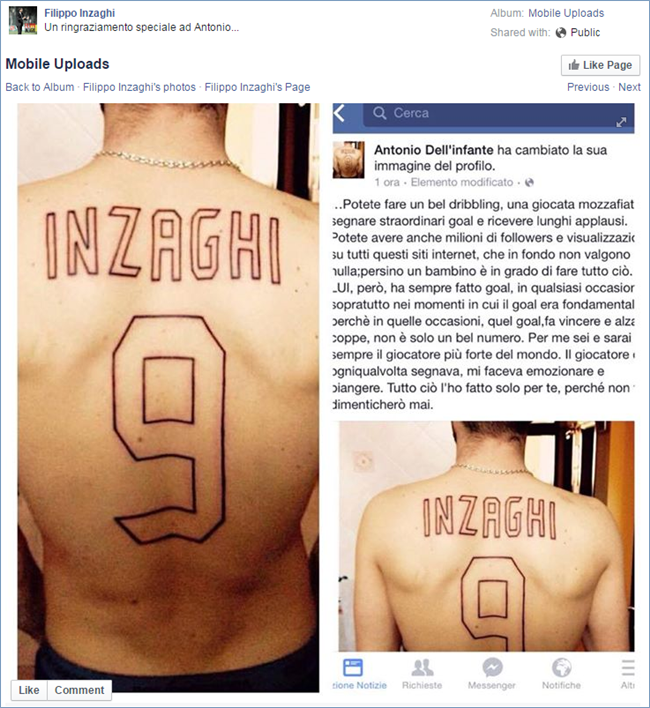 Inzaghi then went and topped it all off after catching wind of Antonio’s enormous tattoo tribute on Facebook – fitting for a man who specialised in applying deft finishing touches for so many years.

Both impressed and quite possibly concerned by the levels of devotion on display, Inzaghi sent his biggest fan a personal message of “special thanks” which we can only imagine made Antonio feel all frothy in his special place.