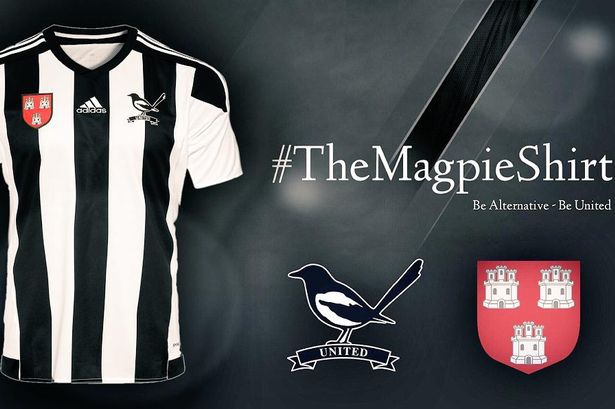 Newcastle United have banned The Magpie Brand from selling its black and white tops. The shirts are a popular alternative to the sell-out Wonga-embossed official kit.

Newcastle’s lawyers threatend The Magpie Brand. Stop selling the shirts or else.

The Magpie Brand realised “there was the possibility of an expensive legal battle which may or may not go our way [and], as a small group of fans with families, mortgages and children, we had no option but to cave in to the bullying tactics employed against us. We simply did not have the money to defend our position.”

It’s an overreaction which shows a lack of respect to Newcastle United fans. he fact that more than 500 people want to wear a black and white shirt that doesn’t have Wonga on it hardly represents competition for Sports Direct and the club should be able to laugh it off. Putting Wonga on Newcastle’s shirts is bad enough, but it’s disappointing that the club doesn’t seem to have any understanding or desire to connect with different opinions within the city or around the world. That’s not representative of Newcastle’s traditions.

The Magpie Brand have issued a statement:

We are saddened by the treatment received from the club. It is a sign of the hollow shell that Newcastle United has become that the club will threaten its supporters with legal action, even at a time when it claims to be making an effort to improve relations with fans.

Newcastle issue their own statement:

The club (via its lawyers), has engaged with The Magpie Brand over a number of weeks in an attempt to find a solution that would work for both sides. We made it very clear from the outset that we would only take legal action as a last resort which we hoped would not be necessary and this has proven to be the case. The club needs to protect its commercial rights, hence the reason for the initial dispute arising and we have engaged with The Magpie Brand in such a manner as to resolve the matter amicably.

Because when you send in the big-money lawyers you know you’re only being fair.