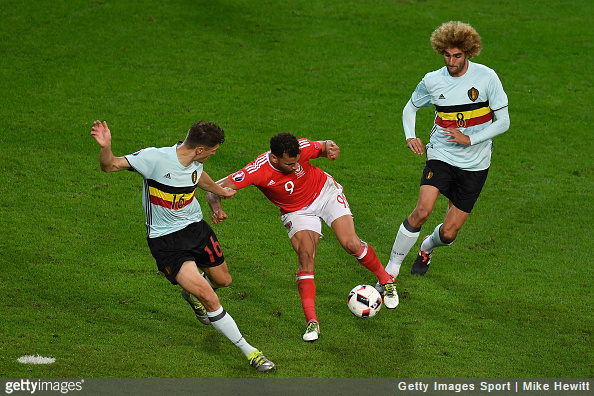 We’re not going to pretend for a single moment that there is anyway on Earth to improve upon Hal Robson-Kanu’s masterful goal for Wales in their Euro 2016 quarter-final win over Belgium.

However, graphic designer Rick Hincks (known professionally as Rincks) has come as close as humanly possible with his cracking minimalist take on HRK’s Belgian-bamboozling belter.

Using his signature isometric style, Rincks has broken down Robson-Kanu’s strike and reconfigured it in its simplest, most clinical form by creating a line map guide to how the goal was scored…

It’s not the first Euro 2016 goal that Rincks has had his wicked way with either, having previously given Dimitri Payet, Robbie Brady, Xherdan Shaqiri and Gareth McAuley the same treatment…

The prints all form part of an ever-growing collection of classic moments from European Championships past.

Indeed, iconic goals from the likes of Marco van Basten, Paul Gascoigne and Francesco Totti have also been redrafted in similar detail.

The best bit? All of these ‘Euro Moments’ illustrations are available to peruse and buy over at Rincks’ online store, with prints starting at just £14.50.

Go on, treat yourself!