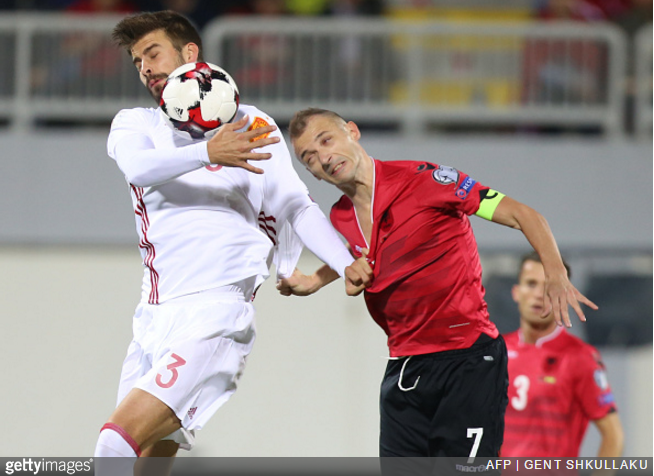 Gerard Pique has vowed to retire from international duty with Spain after the 2018 World Cup as the result of yet another mini-controversy brought about by his staunch pro-Catalan independence views.

Pique was booed and heckled throughout Spain’s World Cup qualifier against Albania on Sunday after it was noticed that, unlike his teammates, his shirt did not bear any red and yellow trim (the national colours of Spain) on the cuffs.

Having deliberately cut the sleeves off his jersey, the Barcelona centre-back was duly subjected to a barrage of criticism for antagonising fans by bringing his politics into football once again.

Exhausted by the never-ending furore, Pique immediately tendered his retirement after the game:

I have tried everything, but I can’t bare this anymore, today’s issue of the sleeves is the the straw that breaks the camel.

They’ve managed to make me lose the excitement of coming here and although after Russia I’ll only be 31, I’ll leave.

It was at this point that the Spanish Football Federation (RFEF) stepped in and pointed out one major flaw in haranguing Pique had received for ‘modifying’ his shirt.

Indeed, it turns out that the red and yellow trim only appears on the short-sleeved version of the shirt anyway, meaning that the cuffs Pique had cut off his jersey were plain white.

Some malicious comments accused [Pique] of cutting the sleeves of the jersey to avoid wearing the band with the national colours.

In this regard, the RFEF wishes to explain that said band on the Adidas jersey only exists in the short-sleeve version, and not on the long-sleeve, which is the one Pique used in the match.

Gerard Pique cut the sleeves with the sole aim of playing more comfortably, the same way other players have done on many occasions.

The RFEF also made sure to point out that Pique’s defensive partner, Sergio Ramos of Real Madrid, also cut the sleeves off his long-sleeve shirt and therefore played without ‘Rojigualda’ trim for 80 minutes of the Albania game too.