Lineker, Hansen and co., more boring than ever 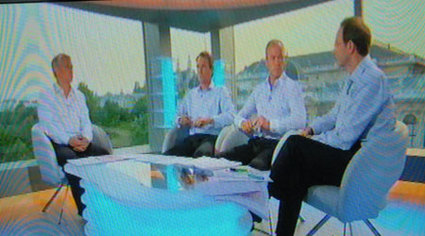 The BBC has received complaints about the dress sense of its Euro 2008 football pundits. Viewers say Gary Lineker, Martin O’Neill, Alan Shearer and Alan Hansen look like they’re in uniform, with blue shirts and dark slacks.
Writing on the blog of Roger Mosey, Director of BBC Sport, one irate viewer moaned: “Will someone PLEASE do something about what Gary and the other pundits are wearing. Every night they seem to be in uniform, with matching shirts and trousers.”

Surely this is no accident. But whoever decided that putting the pundits in uniform was a good idea, has no understanding of punditry: not only does it make the likes of Shearer and Hansen sound like they’re repeating each other, even more than usual (with Big Alan just rephrasing what Scottish Alan has just said), but it means we’re deprived of seeing Shearer decked out in the shiniest, tightest trousers in his wardrobe.
To the BBC – sort this out, now.