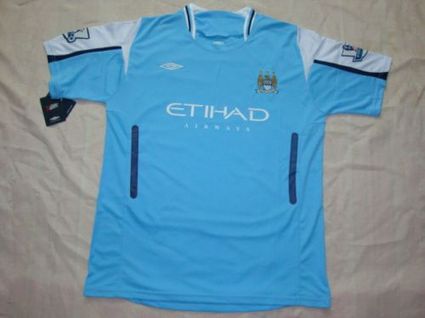 Man City’s new 2009/10 kit is worth a cool Â£45million. Next week the club will announce a Â£30m shirt sponsorship deal with Air Etihad, set to run for four seasons. Umbro will also take over from Le Coq Sportif as City’s shirt manufacturer. That deal is worth Â£15m, also over four years.
Air Etihad is the national airline of the United Arab Emirates. Ironically, and amusingly, “Eithad” translates into English as “United”. Ho ho.
Do you like the kit (leaked photo above)? Vote below…