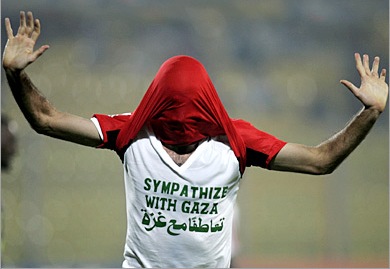 1. Mohamed Aboutrika
At the 2008 African Cup of Nations, the Egyptian midfielder lifted his shirt after scoring against Sudan to reveal a T-shirt bearing the message “Sympathy with Gaza”. He was given a yellow card for breaking FIFA’s rule against displaying political slogans during play, but received no further punishment for his political statement.

2. Ian Wright
After scoring against Bolton Wanderers in 1997, the Arsenal striker unveiled a Nike T-shirt bearing the legend: “179 Just done it”. In fact, Wrighty hadn’t broken Cliff Bastin’s club scoring record of 178 goals – he had only equalled it (Wrighty was a great striker but his maths skills leave a lot to be desired). But he did break the record five minutes later, with a tap-in from a couple of yards out. Gooners who fondly remember the moment may be interested in this fine commemorative T-shirt.

3. Lee Trundle
After Swansea beat Carlisle in the final of the Football League Trophy at the Millennium Stadium, Lord Trundle removed his shirt to reveal a T-shirt showing a cartoon of a man in a Swansea kit pissing on a Cardiff shirt. I think it’s a metaphor. Maybe not. 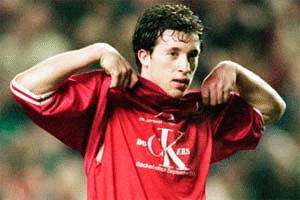 4. Robbie Fowler
In 1997, God famously showed his support for Liverpool’s beleaguered dockers with this Calvin Klein-style T-shirt. He was later fined 2,000 Swiss Francs by Uefa.

5. Artur Boruc
In 2008, the controversial Celtic goalkeeper caused a religion-related ruckus when he revealed a T-shirt bearing the legend: “God Bless the Pope”. Then-Celtic manager Gordon Strachan made light of the antics of his Holy Goalie. “If it was ‘God bless Myra Hindley’, I might have a problem,” he joked. Politicians didn’t see the funny side. Gregory Campbell, a Democratic Unionist Party MP, tabled a House of Commons motion “deeply regretting” the Pole’s behaviour during the Old Firm match. Oh, get a sense of humour. 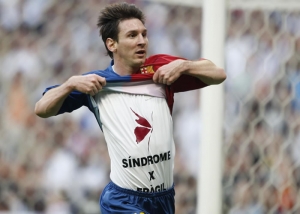 6. Lionel Messi
During this season’s Clasico at the Bernabeu, the brilliant Argentine showed his support for sufferers of Fragile X Syndrome, a rare genetic condition. Messi relates to the illness, as he suffered from hormonal problems when he was a child. 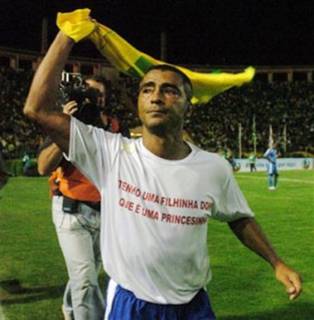 7. Romario
During a friendly between Brazil and Guatemala to mark Romario’s international swansong, he removed his shirt after scoring to reveal the message: “I have a little daughter with Down’s syndrome who is a princess”. The heartless referee then booked the Brazilian.

8. El Hadji Diouf
At the 2002 World Cup, the Blackburn player celebrated scoring for Senegal by lifting up his shirt to reveal a T-shirt bearing a face that looked a lot like Osama bin Laden. Actually, it was Cheikh Amadou Bamba, a Senegalese mystic who Diouf follows. (I couldn’t find a photo of this one). 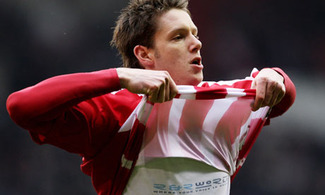 9. Greg Halford
When Halford scored against Hull City in this season’s FA Cup fifth round, he pulled up his Sheffield United top to reveal the logo of RandRWorld, a record company in which he is a major investor.

10. Paul Tait
Tait played for Birmingham City for eleven year, without distinction. His most famous moment came in the 1995 Auto Windscreens Shield final, when, after scoring the winner, he revealed a T-shirt that read: “Shit on the Villa”. That’s Aston Villa, Birmingham’s rivals, in case there was any doubt about which Villa he meant.
There, and I didn’t even mention Kaka.