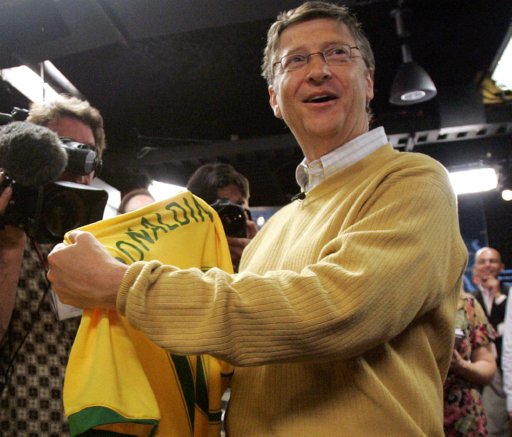 “Anybody know if this guy still plays on the Madrid Royals roster?”

Absolutely no idea if this is kosher or not, but a report on the website of reputable Spanish newspaper El Confidencial is claiming that Bill Gates has contacted Real Madrid with the express intent of hammering out a naming rights deal for the club’s stadium, which may or may not see it renamed the ‘Microsoft Santiago Bernabeu’ or the ‘XBernabeu 360’ or something of that nature.

According to El Confidencial, a preliminary meeting between Mary Garana, President of Microsoft Spain, and Real Madrid head honcho Florentino Perez took place in the Royal Box at the Bernabeu during the week, though a decision isn’t expected at any point in the near future as, along with the stadium renovation plans that are already afoot, Perez  is also keen to take his time over a deal that will undoubtedly be “emotionally delicate” for fans.

Still, if you’re going to agree to pay members of your staff one-quarter-of-a-million Euros per week then you’re bound to have to find that money from somewhere. As Bruce Hornsby and his Range once so succinctly put it, “that’s just the way it is and some things will never change.”