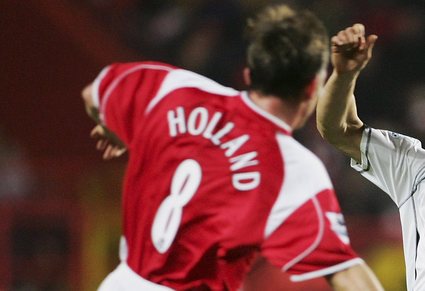 Here is an XI so multicultural that even Arsene Wenger couldn’t have dreamt it up!
George Poland
A war-time Welsh goalkeeper who went on to play for Liverpool.
Alan Oman
The ex-Northampton Town full-back provides a bit of Middle Eastern variety to our predominantly -land centric team.
Mike England
Former Blackburn, Tottenham, Cardiff and Wales centre-back.

Ryan France
Versatile Hull City player with a sports science degree.
Jose Luis Gonzalez China
We don’t know too much about the Mexican man other than he played for Atlante.
Israel
The Real Betis youngster has spent time on trial at Chelsea.
Matt Holland
The Charlton Athletic midfielder is our token representative of several footballing Hollands.
Stephen Ireland
The Manchester City midfielder is the only player in XI to represent his namesake country.
Jason Scotland
This striker plays in Wales for Swansea, is called Scotland and represents Trinidad and Tobago. Cosmopolitan!
Joe Jordan
Scottish through-and-through but here courtesy of the name he shares with the Arab nation (and Peter Andre’s missus for that matter!).
Alan Brazil
Once the subject of the famous headline ‘Brazil 5, Southampton 2’. Brazil is now a presenter on TalkSport.