Notes and conclusions on the weekend’s Premier League action… 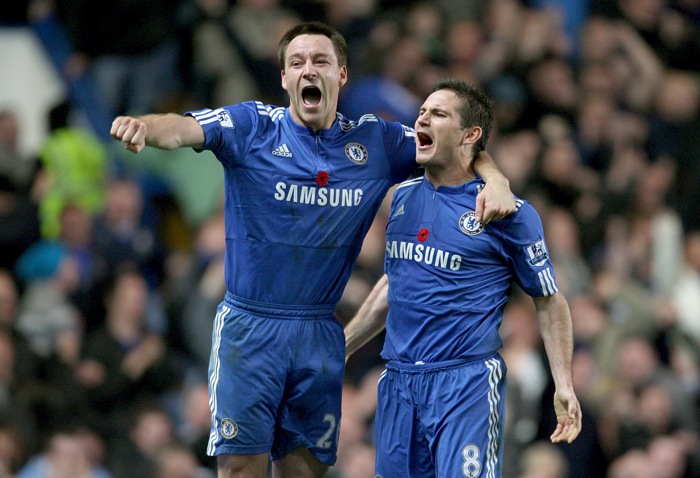 “Wahay! Lampsy, I scored the winner against Man Yoo! Me! Wahay!!”

• Not a great game at Stamford Bridge, but absorbing in the same way that a foreign language film can be absorbing – you know you’re watching something good, but you’re not quite sure why it’s good. On MotD2, Lee Dixon (a fine pundit these days) and Alan Hansen (still The King) both hailed the quality of the match, whereas I thought it was a little bit dull.

Anyway, Chelsea were undoubtedly lucky to get the win – John Terry gave away a clear penalty that wasn’t given, and Darren Fletcher’s ‘foul’ on Ashley Cole, which led to JT’s winner, was – to my eyes – a fair, if robust tackle. Oh, and Didier Drogba fouled Wes Brown in the box, which certainly didn’t help United defend the goal. Oh, and I seem to remember an offside given against Wayne Rooney when he was through with only Petr Cech to beat, but A. Cole was playing him on. Oh, and the ref didn’t play quite enough added time for Fergie’s liking.

So, Martin Atkinson = definitely not on Fergie’s Xmas card list. Still, United didn’t take their chances, so they can’t moan too much. Rooney and Fletcher were by far their best players, but this Chelsea are a powerful unit (a word for Bransilav Ivanovic, who I thought was superb – he’s a confidence player, clearly, but when he’s this confident, what a fine player he is), and you need more than two good men to take ’em down.

What does this mean for the title race? It’s far from over, but Chelsea’s oil-fat arses are wedged into the box seat. We’d all agree on that.

• Mark Schwarzer @ Wigan = the best goalkeeping performance of the season so far.

• If Cesc Fabregas is this good at 22, how good will he be at 26/27? The mind boggles. And Wolves are going down, no doubt. Although I bet on them last week to be relegated, so perhaps not.

• Darren Bent v Karma. Karma wins. Bent dived (subtly) to win a penalty against former club Spurs at the Lane, so it was only fair that he missed the spot-kick. Btw, in terms of athletic ability, Herelho Gomes is a supremely gifted keeper, perhaps the most gifted in the world. If only he had a brain.

• Sam Allardyce is an egotistical arse. All that ‘look at me’ shit after he made a couple of effective substitutions against Pompey. Get over yourself Sam, managers do it all the time.

• Wayne Bridge doesn’t deserve to go to the World Cup finals. Stephen Warnock does. Hell, anyone with a left-foot and an English passport. Not Bridge though.

• What one man can do, another can do. Jimmy Bullard has single-handedly boosted morale at Hull. His effervescent performance against Stoke showed his team-mates what it means to play without fear. If Bullard stays fit for the rest of the season, Hull will stay up.