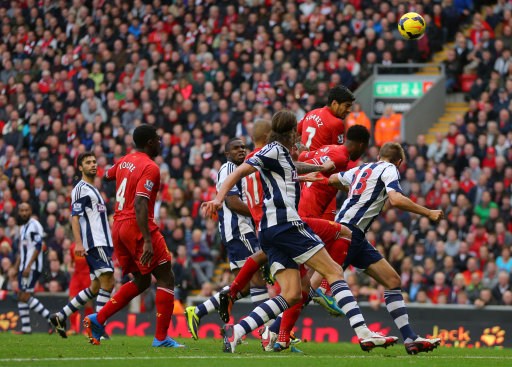 A fantastic hat-trick from Luis Suarez fired Liverpool to a 4-1 win at home to West Brom on Saturday, a result which keeps the Reds just two points behind league leaders Arsenal.

The Uruguayan’s opener, coming on 12 minutes, was a superb solo effort, after waltzing through the West Brom defence before he headed home no. 2 soon after. The third, another header, came on 77 minutes after Daniel Sturridge had made it 3-0, courtesy of a magnificent chipped effort from all of 20 yards.

Prior to Suarez’s third goal, James Morrison had pulled one back for the visitors from the penalty spot but the game belong to Suarez who showed why he is one of the best strikers in world football. Indeed, as well as his three goals, the striker produced a performance of super-high quality and one which West Brom simply couldn’t live with.